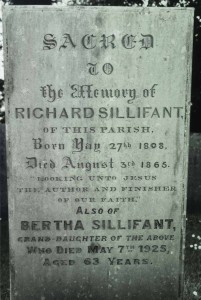 The Sillifant surname was registered with the Guild of One-Name Studies in 2002 by Kirsty Gray after several years of extensive collaborative research with Beryl Young (then of New Zealand, now Australia).

Before the modern age of digitised resources, we began piecing family lines together using the 1851 and 1881 census discs produced by The Church of the Latter-day Saints (LDS). With regular visits to the Family Records Centre in London and the Devon Record Office, as well as Beryl borrowing LDS films, we slowly began to develop Sillifant trees. Over the past fifteen years, the study group has grown with people subscribing to a journal which is published three times a year. Other interested individuals also keep in touch via email and on social networking sites.

More and more records are coming available and the Sillifant Family History Project holds a wealth of information on the name, including photographs, wills, parish and BMD records from across the world, forces records, newspaper articles and much more.

The journal is now available in the Members Area of this website at no charge and the project coordinators are keen to engage with anyone with an interest in the Sillifant name.